After a couple of delays, a Hallmark Channel movie I co-wrote is finally going to be airing!

Country at Heart is the story of a struggling country singer who meets a Nashville songwriter in need of inspiration. Teaming up to write a song, their work gets complicated but results in both a hit song…and true love. The movie stars Jessy Schram and Niall Matter, who were both in movies I’ve written before (Royal New Year’s Eve and Frozen in Love respectively) and Lucas Bryant. It is set to debut Saturday October 3 at 9pm/8c. 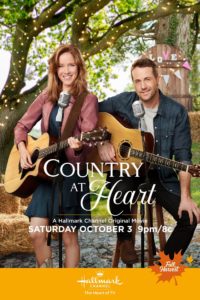