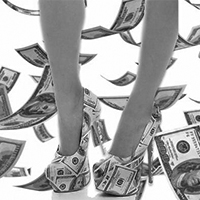 After her husband suffers and aneurysm and slips into a coma, a housewife and mother of two teenagers finds out that he owns a strip club that is much more than meets the eye, but since it is now her only source of revenue, she has no choice but to run it.

Suburban Atlanta housewife and mother SARAH HYDE (late 30s) thought she had the perfect life.  Her husband, DANNY (40s), was an economics professor.  Her kids ALEXIS (16) and CONNOR (15) were straight-A students who never got in any trouble.  She had a beautiful home that she loved taking care of with a garden she tended with pride.  It was like something out of a movie and she loved it.

Then she found out it was all a lie.

A call from the hospital brings the tragic news that Danny has suffered an aneurysm and has slipped into a coma from which he may never wake.  Devastated, Sarah tries to figure out how to keep her family going as she faces a mountain of medical and other bills and absolutely no paychecks coming in.  Just when it appears that she may lose the house she loves so much, she finds out that Danny was keeping secrets, a trail of lies that leads her to The PoleCat Lounge, an Atlanta area strip club.  Thinking at first that he was just a frequent patron, Sarah goes in looking for answers only to find out that he wasn’t a customer – he was the owner!

She wants nothing to do with the place but unable to get anything more than a minimum wage job after nearly twenty years of being a housewife, Sarah is faced with an undeniable fact: the PoleCat Lounge is her sole source of income.

Now Sarah must take over the club and try to make it work for her against increasingly insurmountable odds.  The deeper she gets the more trouble she courts as she uncovers layer after layer of criminal activity that the club is masking – everything from prostitution to drugs to pornography to Russian hacking schemes.  Aided by her rapscallion brother ZACH (30s), Sarah comes into contact with a rogue’s gallery of people who may or may not be on her side including HEATHER (30s), a friend and neighbor who grows suspicious of her new life; JUSTIN (Late 30s), the family lawyer who kept Danny’s secrets; MIKE (40s), a Russian mobster with anger issues; BEN (40s), an FBI agent with ulterior motives; ONETTA (50s), the manager of the club who may be more dangerous than she seems; RACHEL and KAITLIN (20s), strippers who definitely don’t have hearts of gold; EVAN (30s), a bartender who sets his sights on Sarah in ways that might not be exactly healthy; and LOGAN (20s), the intimidating security guard who has more than a few skeletons in his closet.

And she must handle all of this will still getting her kids to school and hosting the neighborhood watch committee meetings.

MAKING IT RAIN is a darkly comic series that is inspired by classic anti-heroes in shows like Weeds, Breaking Bad, Orange is the New Black, and Ozark, set in the glamorously grimy world of a strip club.  Filled with rich characters, danger and betrayal at every turn, and a wry sense of humor, the show is certain to become the next binge-worthy, water-cooler series on everyone’s must-watch list.

Sarah Hyde (Late 30s)
Funny, down-to-earth, fast with a quip, this picture of the “perfect” suburban mom with an idyll family and home gets upended when faced with the realities of a very harsh world.  Rather than fall apart, Sarah surprises everyone, including herself, with resilience and strong will to not go down without a fight, making her wonder how “perfect” her life was before all of this.

Zach Woodward (Mid 30s)
Sara’s brother is one of those charming rogue types, way too handsome for his own good, a fact that he has used to his advantage in less-than-above-board ways more than once in his life.  He is openly gay but in a shrugging, matter-of-fact way that allows him a certain “flexibility” when it comes to the people that he is trying to manipulate.

Alexis (Alex) Hyde (16)
Sara’s daughter is pretty, popular, smart, and, much like her uncle, uses all that to her advantage.  While appearing to be the perfect kid on the surface, she has a “mean girl” streak a mile wide and is always testing the boundaries of what she can get away with.

Connor Hyde (15)
Sara’s son is the complete opposite of his sister – quiet, not many friends, and a straight-A student.  He is a good kid with a strong moral compass who wants to stay as far away from trouble as he can possibly get.

Heather Gilliam (30s)
Sara’s next-door neighbor and best friend is delightfully outrageous southern belle with a toddler on her hip and a husband who doesn’t pay enough attention to her (at least in her mind).  This leaves her looking for fulfillment in whatever ways she can find them, even if it means hurting the people she loves in the process.

Danny Hyde  (Late 30s)
Sara’s comatose husband, who we will see in flashbacks, seems like an average guy with an average job and average life, but he has a deep well of secrets that keeps surprising Sarah and making her wish that she had known him better.

Justin Yi (Late 30s)
The Hyde’s lawyer and longtime friend knew everything that Danny was up to and hates that he has to bring Sarah into it, especially since he has always harbored a bit of a crush on her.

Ben Buckley (Early 40s)
A handsome, low-key, charming, and seemingly by-the-book FBI agent who may not be all that he appears to be.

Mike (Mikhael) Zherdev (40s)
The Russian boss of the illegal operations at the strip club is trying to turn a new leaf and find ways to control his rage issues, but usually fails in ways that end up being bloody.

Onetta Bartlett (50s)
On the surface, the manager of the strip club is a refined woman of taste and a possible ally for Sarah as she navigates this new world, but underneath lies a ruthless streak that makes her more of a threat than anyone else in the club.

Rachel Santiago (20s)
One of the strippers at the club, Rachel is the “bad bitch” of the catwalk, a woman that no one, including the angry Mike and the sometimes scary Onetta, are eager to mess with.

Kaitlyn Dell (20s)
Another stripper at the club, Kaitlyn is Rachel’s cohort and right-hand-man but not exactly the sharpest tool in the shed, which in some ways makes her even more dangerous than Rachel.

Evan Atkinson (30s)
The bartender at the club is an unassuming type who is dating Rachel but develops an interest in Sarah that may be more than just romantic.

Logan Decker (20s)
The security guard at the club is a muscle-bound guy’s guy who has more than a few secrets of his own.