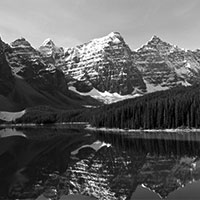 This award-winning drama takes a tough but tender look at the issue of assisted suicide as a man is brought up on murder charges after helping his terminally ill lover end his life.

“Mountains” manages to successfully merge four different kinds of plays into one dramatic package. On the surface it is a courtroom drama , telling the story of a man accused of murdering his terminally ill lover. A series of courtroom scenes track the progress of the trial, ranging from funny (as two strong-willed lawyers trade barbs with one another) to intense (as these same two people fight for the life or death of a man).

It’s also a topical play, dealing with some of today’s most difficult issues including AIDS and the right to die. As we move into an era where physician-assisted suicide is becoming more and more accepted, will that lead us down the “slippery slope” to mercy killings committed out of “love”? This play asks the those kinds of tough questions as a group of lawyers, doctors, and a judge all have to choose between doing what is right ethically and what is right morally.

There are also flavors of a “who-dunnit?” as one of the prosecuting attornies begins to believe that they may not have the right man on trial. As the lawyers begin to dig deeper and deeper into the motives and actions of the defendant and his friends, they uncover a secret that will keep audiences guessing until the very end.

But at its core, “Moutains” is ultimately a love story. Through the testimony of the trial we get to see these two people’s lives together, from their romantic first meeting to their bittersweet end. It is here that “Mountains” is the most successful, transcending the barriers of sexual-orientation to become a story that anyone who has ever been in love can identify with, evoking laughter and tugging at the heart.

Corey Daniels [30’s, Male]
Alan’s husband, lover, friend, and soul-mate. He is a passionate man in virtually all areas of his life and it hurts him deeply to know that the things has done and the choices he has made have hurt others.

Alan Wilson [30’s, Male]
The accused in the murder of Corey Daniels. He dreamed that they would be together for the rest of their lives, but never could have imagined how painful the reality of that dream would be.

Pritchett Monroe III [35-45, Male]
Assistant District Attorney and lead prosecutor in the case of State v. Wilson. Although he has not sold his soul to the devil for the publicity and prestige of the District Attorney’s office, he has had several meetings on the topic.

Dr. Alison McCray [30’s, Female]
Alan’s best friend, a psychologist with a successful private practice and a national radio call-in show. she is caught between her ambition and her conscience but remains loyal to the people whom she loves.
,p>
Christina Myers [30’s, Female]
Lawyer, representing Alan Wilson in his murder trial. She is desperately trying to hold onto the ideals that made her want to be a defense attorney in the first place.

Elaine Daniels [30’s, Female]
Corey’s ex-wife and mother to their child. For years she had to struggle with the pain, grief, and embarrassment of finding out that her husband was gay. Her hatred toward him is only checked by her deep and undying love.

Amanda Richardson [30’s, Female]
Assistant prosecutor with the District Attorney’s office, currently working with Pritchett in the court and out. She is young and still believes in concepts of “right” and “wrong”.

*These parts may be played by the same actor.

1997 Robby Awards
Michael Devereaux Playwright Award
“Mountains” was given this honor over seven other original plays nominated in the category.

“Rick Garman’s new play is, quite literally, a matter of life and death – a compelling inquiry into an ill person’s quality of life and the point at which death becomes the preferable alternative.” “Compassionate and surprisingly good-humored, this story is especially timely.”

“Theater Pick of the Week.”

“Moving mountains may be difficult to do, but the current production of ‘Mountains’ is undeniably moving. Rick Garman’s world premiere hits all the right emotional peaks.”

“Garman has presented his case in a confident, streamlined manner. He has also filled his characters with warm-hearted humor and quirky charm, which helps immensely to put a human face on the dilemma. Garman’s intimate look at romance and relationships is expertly balanced with the intensity of his courtroom confrontations.”

“…Garman has written such a beautifully nuanced play…”

“Here the word comes first. Mountains is many things : a courtroom drama, a love story, an AIDS play, a plea for euthanasia. Garman has intricately woven all of these various strands into a rich tapestry and populated it with some real and feeling characters….”

“Mountains is a highly involving drama with some witty humor to leaven the heavy going.”

“The Colony Studio Theatre mounted this intriguing new play by Rick Garman, which is as much a courtroom thriller and a social-issue drama as a gay love story.”