Out By the Lake 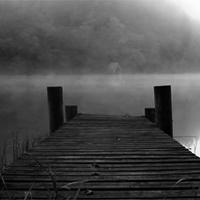 A group of gay best friends spends a weekend at a lake house in a rural Georgia town and discovers that the small community is not what it seems to be.

When buttoned down lawyer Jack gets an opportunity to use his boss Beth’s lake house for the weekend, he jumps at the chance thinking it’ll be a great getaway for Ellie and Camille, a married couple who is eight months pregnant with the child he donated the sperm for, and Matt, his relatively new (and much younger) boyfriend.  Even though it’s deep in the Georgia woods, a region not typically known for its tolerance of gay couples, the foursome heads off for a few days of much needed rest and relaxation.

Not long after they arrive, they start to notice that things in this small community are not what they seem.  Jack encounters an enigmatic young girl at a neighboring house; Matt finds a mysterious locked room in the lake house; Camille thinks she is being followed; and more.  When Beth and her husband Asher arrive unexpectedly, things take even stranger… and then dangerous turns.  Now, the group is in a battle for their lives and the life Ellie’s unborn child.

With shades of Get Out, this unique thriller deftly balances scares with deeper themes as it looks at what a group of people, pushed to the brink, are willing to do to stay alive.

Jack – 40
A buttoned-down lawyer who is feeling a little insecure about his age and new relationship.

Ellie – Late 30s
A chef who is eight months pregnant and worried that her marriage to her wife is not as solid as it should be.

Matt – 26
Jack’s boyfriend is a fitness-trainer by day, student nurse by night who has a hard time getting people to take him seriously.

Camille – 30s
Ellie’s wife is a shoot-from-the-hip type who refuses to take any crap from anyone.

Beth – 50s
Jack’s uptight boss may have ulterior motives for letting him use her lake house.